The Battle of Oriskany – A Movement that Created an Independent America

After years of struggling without representation against an increasingly taxing king and aristocracy in England, many citizens in the American colonies united to take a stand, enumerate their grievances, and declare their independence from the established order. This movement led to the Battle of Oriskany.

But not all of the colonials agreed. Some were beholden to, or too comfortable with the establishment, so they decided to remain loyal to it. Many more were simply too afraid of the consequences of standing up to power, or change itself.

Just one year after the Declaration of Independence there was a terrible struggle between the establishment loyalists and the innovation patriots right here in central New York. Today marks the Anniversary of the Battle of Oriskany.

On August 5, 1777 – 239 years ago – our patriot forbears led by General Nicholas Herkimer left the comfort of their shops, farms and homes, and set out to defend the Mohawk Valley against the English Army, their loyalist colonials and their native-American allies.

General Herkimer and many of his militia were killed in one of the bloodiest battles in all the Revolutionary War. But their efforts helped thwart the English plan to take Champlain and the Hudson to divide the colonies and smother their hopes of a better future. Their struggle eventually paid off in a Patriot victory over England and in creating an independent America.

Over the following two-plus centuries this movement grew into the strongest democracy in history and into the American Dream of freedom, opportunity and security for all.

But today our countrymen are as divided as then. Our democracy has withered into a dupololy of establishments we call Republican and Democrat. Both parties have betrayed the American Middle Class as opportunity, wealth and income have gone to only a tiny fraction of the population. The people are angry and confused as to how best move forward. Some long for better days from the past – others look to the future to provide better opportunity.

The name Herkimer lives on around us – a village and even a county are named for him. But as we stand here at the birthplace of General Herkimer and contemplate his and his men’s fate, their sacrifice, and their legacy – let’s also remember our obligation to honor our earliest military veterans. We all have a duty to carry the struggle of democracy forward, stay engaged in the political process by learning about all options, and exercise our right to vote in November. 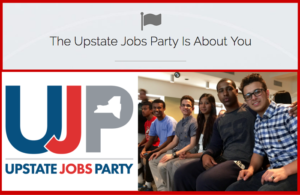 NEXT -> The Upstate Jobs Party is a movement breathing new life into the American Dream borne from decades of poor governance and empty promises of politicians saying they will create jobs, but keep repeating the same mistakes without bringing significant change to our region.

About the Author: Martin Babinec

Martin Babinec founded Silicon Valley based TriNet in 1988, serving as CEO for the company’s first 20 years and Chairman until 2010. TriNet’s cloud based HR services help 14,000+ small to mid sized companies and the company has grown to annual sales of $3 billion and listing on the NYSE. In 1999, Babinec relocated his family from Silicon Valley to his hometown of Little Falls, NY, where he founded Upstate Venture Connect (non profit dedicated to accelerating growth of startups across Upstate NY), StartFast Venture Accelerator (which invests in and helps grow a cohort of 5-8 startup companies each summer in Central New York), and UpVentures Capital (where he makes direct investments in startup companies and serves as limited partner and advisor to a dozen venture capital and seed funds). In 2016 Babinec founded the Upstate Jobs Party (UJP) and ran as an independent candidate in New York’s 22nd Congressional District. Advocating policies and private sector engagement to spur job growth, the race earned national recognition as the only congressional race in which an independent candidate was competitive. He continues to lead UJP on a path to earn constituted party status in NY State as a vehicle to influence political discourse in reversing regional population decline.