Last year, the Upstate Jobs Party was created by Martin Babinec during his run for the 22nd Congressional District. Today, the party he created is still in use. It’s one of the party lines Syracuse mayoral candidate Ben Walsh is running on. Now Babinec is working to secure a permanent ballot line for 2018, which would mean finding a viable candidate for governor. He joins Liz Benjamin to talk more about the future of the Upstate Jobs Party.

Why press forward with the Upstate Jobs Party?
From the very beginning when I made the decision to run as an independent candidate, it was in part based on the belief that we as voters don’t have enough choice, and many voters are sick and tired of what happens with the two mainstream parties. So being able to offer choice, especially as one as important as job creation herein Upstate New York has always been part of my plan.

Will Upstate Jobs provide financial support to candidate?
Upstate Jobs Party as a 501c(4) nonprofit is really involved in issues advocacy and trying to create awareness among voters about the importance of taking advantage of the assets we have here in Upstate New York, and trying to help voters understand there are other options besides taking our tax dollars and giving them to private companies. That’s really what we’re concentrating on with the Upstate Jobs Party. And separately forming a Political Action Committee (Upstate Jobs PAC) will help us identify candidates who align with these principles and use some resources through that Political Action Committee under Upstate Jobs to support selected candidates.

Only independent candidates?
This is not restricted to candidates under the Upstate Jobs Party line. We believe that the right candidate, no matter what their party, are the ones who support the principles of sound job creations, which is not dependent on using taxpayer dollars going directly into private companies, but instead take advantage of our many talents and assets that we have right here in Upstate New York, including the importance that people start companies and grow companies based on being in a supportive environment where they can get connected to the right resources. This is what the Upstate Jobs Party is about.

Do you support the proposal to bring Amazon headquarters to Upstate New York?
I’m not in favor of using taxpayer dollars to be given to private companies, Amazon included. Now, the effort that Rochester and Buffalo are going through in trying to put together a proposal to attract Amazon is actually a worthwhile effort in the essence that it’s creating a lot more awareness about the assets that we have here as a region could leverage those assets makes sense. But on the subject of is it a right way to use our tax dollars – that would not be something I support.

But what about money?
Today’s elections are all expensive, and as a result of that it’s one of the reasons that our two parties have drifted further and further apart because the real dollars come from the two fringes – both left and right. There’s no question that that’s a tremendous influence that most voters are not that tuned into.

Who are you looking at as a gubernatorial candidate for 2018?
We have not reached the stage of talking to specific gubernatorial candidates because we still have to prove UJP’s viability. So what we’re doing here in the 2017 cycle, including the creation now of a 501(c)4 nonprofit, and a separate entity under our Political Action Committee, and using both vehicles to spread voter awareness, demonstrate our traction with both social media, our own in house mailing list and really building support is something we believe will make us attractive to the right gubernatorial candidate next year. Our efforts are not only about any one candidate, we’re trying to get voters aware all across Upstate New York. This is a journey. This is not something one begins out of the starting block, and then get huge statewide following. Remember I’m a guy that builds things. I’m not afraid to take on challenges that are going to take a long time to bring to fruition. Building the Upstate Jobs Party is such a challenge. It’s one that I’ve been talking about now for more than two years and we’ll see where this goes. I’m not a guy that gives up.

What happens if the ballot lines get collapsed?
There are a lot of complications in New York State election law, and I think how this unfolds, including on the all important issue of what happens in the possibility of collapsing ballot lines is a separate area that we are going to continue to fight. There are related aspects to this in New York State election law that we feel are in violation of our First Amendment rights of free speech. 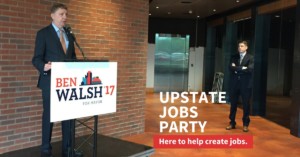 Stay Updated! Sign up for Upstate Party Party newsletters. You’ll receive an email no more than once a week leading up to election day on November 7. Topics will include our initiatives to create more jobs in Upstate New York, highlights on candidate’s we’re supporting in 2017, and comments from our leadership on current job growth strategies.