Vote for Change or More of the Same?

A new report by the Federal Reserve uncovers that only a handful of jobs have contributed to Upstate NY job growth since 2016. It’s time to hold politicians accountable for unfulfilled promises on creating jobs. It’s time to Vote for Change.

Despite the Cuomo administration’s claim that Upstate NY is benefiting from the “largest economic development investment in history,” recent data from the U.S. Bureau of Labor Statistics reveals otherwise. 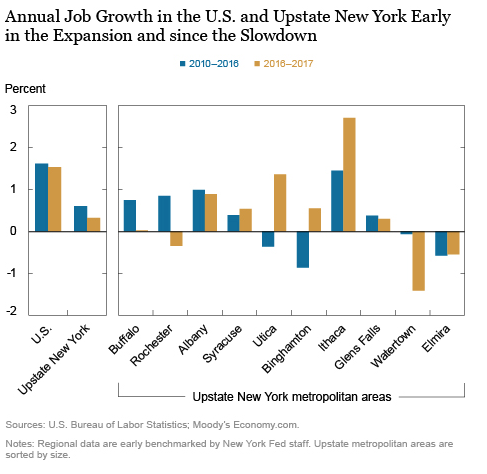 Compiled into a new report by the Federal Reserve Bank of New York, statistics show Upstate NY job growth is weak and is slowing, with only a handful of jobs having been added to the region’s total employment count since 2016.

The Federal Reserve’s Research and Statistics Group reports that Buffalo and Rochester, two of Upstate NY’s largest cities, are showing the greatest “weaknesses.” Modest gains in smaller cities such as Ithaca are nowhere near enough to offset the total losses elsewhere.

Why does job growth continue to climb steadily across the United States when Upstate NY job growth has slowed to an annual rate of only .3 percent?

Governor Cuomo repeatedly justifies spending taxpayer dollars ($25 billion by his estimate) to recharge Upstate NY’s economy. However, these job growth initiatives have produced little to no results in creating real job growth for our region. In fact, according to a team effort by Investigate Post, ProPublica and the Columbia University Graduate School of Journalism, employment in Upstate has grown only 2.7 percent during Cuomo’s tenure – compared to 13.1 percent downstate and 11 percent nationally. Four of Upstate’s 12 major metropolitan areas have actually lost jobs since Cuomo took office.

The investigation also found that in addition to the lack of jobs created since Cuomo took office in 2011, economic development programs suffer from a lack of transparency and objective analysis to determine their effectiveness. One of these programs is Start-Up New York.

In spite of the $53 million in taxpayer funded advertisements telling us how New York State is supporting startups by attracting companies to relocate or launch on or near selected colleges campuses, Start-Up New York has created only 20 percent of the 4,403 jobs pledged by the companies that are benefiting from free taxes. That works out to a cost to taxpayers of more than $60,000 per job created, before even factoring in the costs of 10 years of no taxes for either the businesses – or for their employees!

Other failed initiatives include the Solar City factory project, and the film hub in central NY that remains empty.

“Upstate New Yorkers are tired of empty promises and failed initiatives that have taxpayers footing the bill for corporate welfare by giving our money to private companies,” said John Bullis, Upstate Jobs Party Chairman. “UJP believes the path to stop this nonsense has to include holding our politicians accountable at the ballot box by supporting candidates who pledge to rein in corporate giveaways, and instead focus on what political leaders can do to bring the right people together and leverage the assets we already have in Upstate NY.”

Our focus on enabling individuals to create well paying, innovation industry jobs is the surest path to building a foundation of renewal for Upstate New York’s families, as well as a sustainable, stronger America.

“We help inform both the general public and public officials on options available to spur job growth through ongoing initiatives that foster an energized environment that leverages private sector investment, and by actively encouraging job creators to start companies here, instead of watching them leave to do so elsewhere,” added Bullis.

[UJP] Bring Amazon to Upstate, Or Create the Next Amazon in Upstate!

The Upstate Jobs Party has endorsed candidates in the 2017 election cycle that show commitment to the principles of sound job creation, including readiness to fight the status quo of today’s failed policies.

Review our candidate page, and sign up for our email newsletters to stay informed of additional candidates we expect to endorse before the election. You can also support our mission by liking and commenting on Facebook and Twitter @VoteUpstateJobs.

Even if you are in a district or municipality without an endorsed UJP candidate, be sure to ask whoever is running what they plan to do to spur job creation. How knowledgeable is the candidate about what the options are beyond spending your taxpayer money? No longer can we support candidate who “hope” jobs will appear someday.

It’s only through our asking candidates the hard questions, and then casting our vote do we have a chance to drive the change we need to restore economic vitality, and keep our families together and our communities vibrant.

Please share this messages with your friends, and encourage them to join us too.

Vote for Change on Tuesday, November 7 – Together we can make a difference!

About the Author: Martin Babinec

Martin Babinec founded Silicon Valley based TriNet in 1988, serving as CEO for the company’s first 20 years and Chairman until 2010. TriNet’s cloud based HR services help 14,000+ small to mid sized companies and the company has grown to annual sales of $3 billion and listing on the NYSE. In 1999, Babinec relocated his family from Silicon Valley to his hometown of Little Falls, NY, where he founded Upstate Venture Connect (non profit dedicated to accelerating growth of startups across Upstate NY), StartFast Venture Accelerator (which invests in and helps grow a cohort of 5-8 startup companies each summer in Central New York), and UpVentures Capital (where he makes direct investments in startup companies and serves as limited partner and advisor to a dozen venture capital and seed funds). In 2016 Babinec founded the Upstate Jobs Party (UJP) and ran as an independent candidate in New York’s 22nd Congressional District. Advocating policies and private sector engagement to spur job growth, the race earned national recognition as the only congressional race in which an independent candidate was competitive. He continues to lead UJP on a path to earn constituted party status in NY State as a vehicle to influence political discourse in reversing regional population decline.